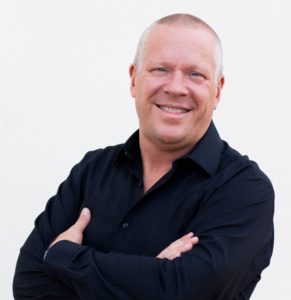 Kevin Wester was born in Port Washington, Wisconsin and grew up in Belgium, Wisconsin – in the heart of Ozaukee County’s strong Luxembourg heritage and culture. He is proud to be 100% Luxembourg American with all of his immigrant ancestors coming from the Grand Duchy to Wisconsin from 1846 – 1865. Kevin was highly influenced by his maternal grandfather, John Burmesch, who was the son of Luxembourg immigrants. “Grandpa John”, as Kevin calls him, “was a crotchety, old Luxembourg farmer who loved to speak Lëtzebuergesch and eat treipen, whose life was deeply rooted in family, faith and heritage.”

Kevin’s grandfather frequently took him to visit the old Burmesch family farm and to visit family homesteads, cemeteries and churches in the area. This experience of his youth, led Kevin to develop an undying passion for, and pride in, his Luxembourg heritage.

Throughout high school, college and his adult life, Kevin has remained an avid historian and genealogist and has written numerous books/booklets pertaining to his Luxembourg ancestors, Luxembourg American topics and local history. He served as president of the Port Washington Historical Society and was a key leader in the restoration of the Society’s 1860 Light Station and the gift of the Light Station’s tower from Luxembourg’s Ministry of Culture. 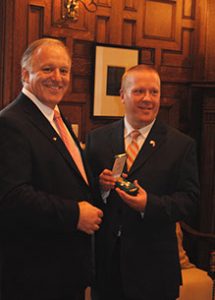 While working professionally in the non-profit sector, Kevin led a group of volunteers in 2001 to begin the organization of the Luxembourg American Cultural Society (LACS) and Cultural Center in Belgium, Wisconsin, in partnership with Luxembourg’s Ministry of Culture and Services of Sites and Monuments. He served as the Society’s first volunteer Chairman of the Board (2001) and later was hired as the Society’s first staff employee as Director of Development (2006) and later as the first, full-time Executive Director (2010).   Kevin oversaw the development of the Society’s membership base, the fundraising for the Society’s $1.5 million Cultural Center, and the development of the Center’s research center which is the largest research center for Luxembourg studies and genealogy outside of the Grand Duchy. He also organized the Society’s Discover Luxembourg Tours and has led numerous group tours to the Grand Duchy, Belgium, Germany and France. 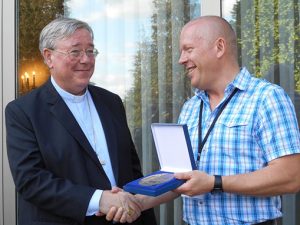 Since that time, Kevin has served as a private consultant assisting Luxembourg Americans with their Reclamation of Luxembourg Nationality/Dual Citizenship. In 2018, Kevin launched LUXEMBOURG ADVENTURES WITH KEVIN WESTER, a group tour and travel consultation company, so as to share his passion for exploring Luxembourg with others from around the world. Most recently, in 2021, Kevin was named Attaché for Cultural Affairs & Public Relations for the Honorary Consulate of Luxembourg in Wisconsin.